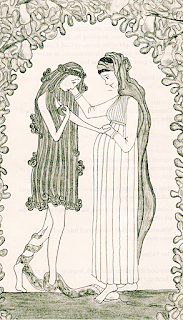 Advent and Christmas, coming in these darkest days of the year, invite contemplation. They make me think--about seasons, about waiting, about where I fit in the grander scheme of things. I feel my vulnerability more acutely when winter storms gather outside and I have to work to stay warm and to guard myself  against harm from the elements. These are times of pause.

That may be why happening upon this image on one of these cold mornings caught me. Eve and Mary. The first in full knowledge of what she's lost. Her head hangs down in defeat. She can't meet anyone's eyes, let alone her companion's. The snake still coils about her feet in apparent victory. The flowers of Eden, now all she has left of the place, still cling to her clothes and ring her head. But she is cast out and knows it only too well.

And then there is Mary, pregnant and understanding completely. She reaches out to Eve in feminine fraternity while at the same time stepping firmly on the head of the snake. Eve may have been temporarily defeated, but she has not lost. Mary is here, bearing more than just hope. She has brought rescue.

And there they are, the female bookends framing the story of mankind. Eve and Mary. Creation and Salvation side by side. They are their own beginning and end, Alpha and Omega. Christ made them both and they have each done what they must. Eve has presented the problem and Mary carries the solution.

Men will not understand this the same way a woman will. When a woman reaches out to place her hand on a sister's pregnant belly, they share an understanding of what was, what is, and what is coming. The life that belly holds moves and grows and promises a future. And as women, we treasure that promise in our hearts in a special and personal way, just like Mary.

And Eve, in her hopelessness, lets Mary draw her into a secret circle of hope and life. There they embrace, where Deep calls to Deep.

During these dark days, Mary and Eve feel together the movement of the coming Christ, and know they have been saved. From the moment of His incarnation, while He still adds cell upon cell to His burgeoning humanity, while He still stirs under Mary's heart, while the process is even just beginning, Christ is already saying, "It is finished."

Drawing above by Sr. Grace Remington, published in Give Us This Day, December 7, 2016
Posted by JoAnne Potter at 4:38 AM 4 comments: