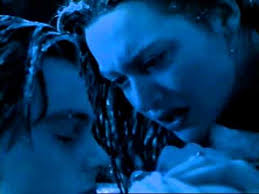 OK. This is the thing. I keep imagining that scene near the end of Titanic--Rose holding onto the frozen and very dead Jack, saying "I'll never let go" as she opens her fingers one by one and Jack sinks down into the North Atlantic. Contradiction? Oxymoron? Delusion? I mean, she's letting go precisely as she says she will not. What's up with that? It didn't made sense.

And then Dave died. Three years ago today. Just like Jack. And I had to figure out what to do next. I mean, the last time I saw Dave on this earth, he was sitting right next to me. Alive one minute and not the next. No heartbeat. No pulse. No breath. And I had to let go. It was unthinkable. I had to do the one thing I could not. I had to open my hand and let him go.

Well, that's when I began to understand Rose. That's when I learned that letting go is not only a function of fingers or an action of hands.
I'll never let go.

And even as I say it, my hands let them all go, one by one.
That's when I know that Rose was telling the truth.

Dave is more than his things. He always was, of course, but after he died, it took awhile to separate them. In fact, Dave is more than his own body. Now, Dave exists in a different place than he did when he lived. I don't mean heaven, although he is certainly there, wherever it is. But he exists apart from his stuff, even his corporeal self, and, increasingly, apart from me.

You see, Dave is beginning to sink into the ocean.

I gradually realized this all along but understood it in a new way couple of weeks ago, when someone asked me out on a date and, well, I accepted it. Now, anyone who knew Dave, and especially Dave and I together, knows that after him, there is no second act. He was my great love story. There will never be another. I don't even want one. But, honestly, I would occasionally like to go out to dinner.

And that's when Dave spoke to me. He did. Not through some ethereal, other-worldly voice, but through the faithful recollection of his friend Zach, who was there to hear the invitation and my acceptance, and who took me aside to say that Dave knew this day would come, that I would some day want to spend time with someone else. Zach told me that Dave had entrusted him with a message for that day--for this day. And, with Zach's voice, Dave spoke to me. He told me he loved me and part of that love was wishing me companionship when I needed it. Dave told me that my happiness was as important to him now as it ever was. Dave told me that, if the man was a good one, and kind to me, to go on a date.

And I did. And it was fine, but when I came home, and walked in the door, I had something so say to Dave in return.
"This has nothing to do with you."

It didn't. It still doesn't. And that's when I understood Rose even better. Dave is alive in me, but he is not alive. Simply by virtue of breathing, I will do things in which he can have no part. I do not have a choice in this. I retain my earthly life and Dave does not. Even more, the life I'm given comes from God and, whether I understand it or not, is His gift to me. Just as I bore witness for Dave while he lived, I bear witness now to God's life in me after Dave is gone.

There's Dave, drifting away, still reaching out, our fingertips only inches apart, but the space between them increases by the second. Dave is gone and must sink into the deep. When that began in earnest, however, when I increasingly knew the howling desolation of being left alone, that's when I remembered the Heart of the Ocean, the precious, fabulous necklace Rose kept after Jack had gone. The necklace wasn't Jack, but she held it for years as a reminder of their life together until she finally opened her hand and let that, too, slip from her fingers.

We all hold on. And each year, when this day comes, I relive the night Dave died--tortured dreams surrounded by fitful sleep, waking up every two hours thinking, "This is when this or that happened", knowing again the tearing pain of separation, renewing again the unthinkable. But with increasing quickness, each time I am rescued. Not by my own memories, nor by my own resolve to move on, but by assurance from a Companion who is perfectly constant and who loves without pause or recrimination.

It is in His name I have been able to open my fingers one by one, both hand and heart, and let go. After all the good that Dave brought me, what God brings me is what sustains now, and brings strength, and resolve, hope and peace. Whatever good I have been able to do since Dave's death, whomever I have loved, and wherever I have walked for the sake of someone else is because of what God is investing in me.

So now I have a double blessing--a temporal one from Dave and an eternal one from God--not the Heart of the Ocean, but the heart of God, one that beats forever. And now, it is God's voice, not mine, that says,
I'll never let go.

Comfort her, comfort her, all things good,
While I am over the sea!
Let me and my passionate love go by
But speak to her all things holy and high,
Whatever happens to me!
Me and my harmful love go by,
But come to her waking, find her asleep,
Powers of height, Powers of deep,
And comfort her tho' I die.


Posted by JoAnne Potter at 5:19 AM No comments: