Why "Miracles from Heaven" Makes Us Cry 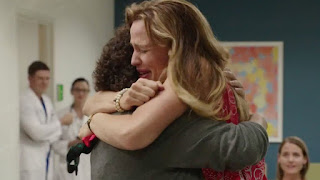 I went to see "Miracles from Heaven" last night and from the moment of walking into the theater lobby, was concerned. All women. Every one.  Not a bad thing, but when they come armed with handfuls of tissues, declaring that they expect to cry, well, that concerns me.

Crying, last time I checked, is not a good time. It can be cathartic, relieving, and useful, but it's never, in my experience, enjoyable. Even at weddings. Even in victory.

So we were off to a bad start.

Anna Beam, the sick little girl at the story's center, is cute and sad and suffering, so sick that she wants, at one point, to die. I didn't blame her. Of course, the movie is about a miracle, so we know from the very beginning that she won't and she doesn't. I'm glad about that. But the story isn't really hers--it's her mother's--her mother, Christy Beam, whose faith fails during her daughter's illness and is regenerated at her healing.

She got her daughter back, of course, and that's good, but what kind of faith did she get? She got a faith borne on the back of healing. What happens if Anna gets sick again? Or her husband? Or one of her other daughters?

Frankly, I was hoping Anna would not survive. I wanted to see Christy in real victory, a victory that is the product of common sorrow, of looking square in the face of our worst fear and knowing that God still loves us and is still directing our lives for good in spite of circumstances. I wanted to see a Christy walk away with a faith that would last. As it is, I couldn't help but wonder what would happen to Christy's faith the next time it is tried.

That was when I understood the tears in the audience--and there were tears, lots of them. Christy got her daughter back--for awhile at least. But most people don't. Most sick loved ones don't live. They die. And we know it. We see it every day. We know that Christy's story will probably not be ours.

We rejoice in Christy's good fortune, but know that we will probably not get that same miracle. Our loved one, when faced with a life-threatening illness or accident will probably not survive. And that is the more common challenge of faith.  That we are to find God in our sorrow, not just in our victory. We are going to need a faith more than that given to Christy Beam. I am going to need it.

So we cry at "Miracles from Heaven". For Christy's pain. For Anna's suffering. And for our own. Fortunately, God hears those cries. Because, regardless of physical deliverance that may or may not come, we are drawn close in trial and loved. That is a miracle. That is my miracle.

photo credit: youtube.com
Posted by JoAnne Potter at 4:45 AM No comments: