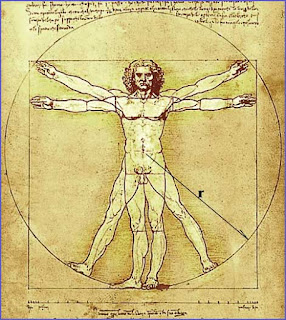 When I left for Italy a year ago, I didn't know why. It wouldn't be a vacation--I knew that. More like a pilgrimage whose purpose had not yet made itself known. I only knew this: that my brief visit to Florence in January of 2017 hadn't been enough. Florence offered more--much more, I thought--and I needed to find it.

And that's not too big of a stretch. Florence, the seat of the Renaissance, was home to names everyone knows--DaVinci, Dante, Botticelli, Donatello, Galileo, and of course, Michaelangelo. So much happened there in so short a time that it changed the way we think about God and man, beauty and evil. The Renaissance was the perfect storm of man in the process of looking for God, digging himself out of the Dark Ages into a Wonderful Light. I wanted to vicariously live it--to climb out of ordinariness and taste it all.

So I decided to stay a month. Surely, in that amount of time, I would find what I was looking for.

Much of Florence was the same as I remembered it--songs and statues, pasta and paintings--so much that there is an actual disease that derives its name from taking in too many of the sights too quickly. But that was not my plan. I had plenty of time and I was going slow. I didn't want to miss whatever it was I was looking for. 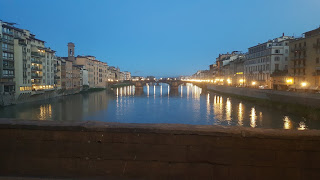 I found the Ponte Vecchio at dawn, 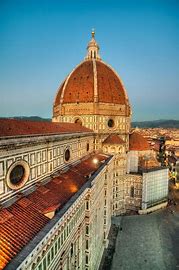 and the Duomo of Santa Maria de Fiore 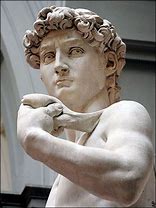 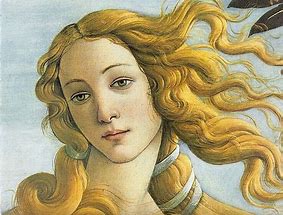 and Botticelli's Birth of Venus.
It should have been enough.
But it wasn't.
There was something more. And, almost a month in, I still hadn't found it.

Along the way, a local had told me I needed to go to the Museo della' Opera del Duomo. "You have to go," he said. When I told him that if I had time, he laid his hand on my arm and repeated, "You HAVE to go." And I put it on the back burner. There were other things to do first, I thought.

But three days before I was to leave, I had the time and remembered the look on his face.

The Opera Museum is in Duomo square and bigger than it looks. It is almost all white and steel and glass, but it has something I've never seen--duplicates of its most famous exhibits made for touching. The originals still lie behind barricades, but faithful copies lie out in the open and the visitor can feel them--every curve of cool marble and plaster.

And that was where I found Him.
Michaelangelo's last Pieta. 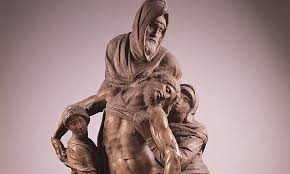 This not the pieta at the Vatican--the beautiful, graceful Mary and sleeping Jesus. This Jesus is very dead, laying awkward across both she and Nicodemus.  He is dead weight, impossible to hold up but unthinkable to let go.

And I walked up to touch the face of Christ. Just like that. Smooth and hard of muscle and sinew. Here was the cord that stretched beneath the skin of His neck.

There were the muscle of His arm and there His brow. I stroked them like I once stroked Dave--slowly and with a lover's caress. 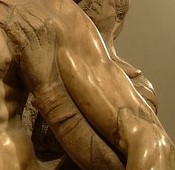 And suddenly He wasn't God but a flesh and blood man. A man given and taken by God. He had it all--blood, bone, tissue, hair, sweat, weariness, the rush of life. The bridge of His nose. His tangled hair. The way His head hung--finished but not defeated. The window of His eyes closed as He fell to the side--intact even though the spark was gone.

Blessed are they who have not seen and believe.--John 20:29

Maybe my faith is too weak. Maybe I am one of those who needs to see, but on this day, I touched my Savior. And even as I heard His voice tell me not to hold on to Him, that He must go to His Father, for that moment I felt the weight of Him, the genuine-ness of His flesh, and I was Mary in the garden, hearing my name spoken, impossible to mistake, in the voice I knew so well. And replying with relief and astonishment, crying "Rabboni!"

15He asked her, "Woman, why are you crying? Who is it you are looking for?" Thinking he was the gardener, she said, "Sir, if you have carried him away, tell me where you have put him, and I will get him." 16Jesus said to her, "Mary." She turned toward him and cried out in Aramaic, "Rabboni!" (which means "Teacher"). 17Jesus said, "Do not hold on to me, for I have not yet ascended to the Father. Go instead to my brothers and tell them, 'I am ascending to my Father and your Father, to my God and your God.'" 18Mary Magdalene went to the disciples with the news: "I have seen the LORD!"--John 20: 15-18


Posted by JoAnne Potter at 2:13 PM No comments:

The Contradiction of Intentional Poverty

"Poverty is freedom. It is a freedom so that what I possess doesn't own me...even God cannot put anything in a heart that is already full" --Mother Teresa

I am rich. I know this without any doubt.

I am rich in situation, in health, in friends, in finances, in safety, in time...in every way I can imagine. I am even rich in spirit, with free access to the family of God and the word of God. In every practical sense, I have autonomy to make my own decisions, to go and do what I want.

And that's the trick of it. If I am to become like Christ, I must become poor.

For your sake He became poor so that through His poverty, you might become rich.--2Cor 8:9
Blessed are the poor in spirit, for theirs is the kingdom of heaven.--Matthew 5:3

I don't even know where to begin sometimes. He has given so much. Everything I have came because God brought it into an undeserving life. I can't, I won't, refuse to take or keep it and thereby denigrate the Giver. What I have was first God's, and He transferred it to me as a trust for me to use in His name. And, in the process, He has filled me up past where I think I know how to administrate it all.

How do I use it and not hoard it? How to I scatter bread upon the waters and be sure I am not casting it to the pigs?  How do I remain comfortable in Him without becoming comfortable in the company of so many earthly good things?

Somehow, in the face of all these riches, I have to feel the pinch of poverty. Surrounded by all He's given, I have to know how poor I really am without Him.

Wealth and comfort are gifts from God. They are. They surround me with ease, but can become a shroud if I forget where they came from and what I am supposed to do with them. I have to give them away, and rightly, to the proper people in the proper situations where they are used to glorify Him. And all the while maintaining focus not on the things or opportunities, but on Him.

Sometimes I screw this up. I see the shiny thing (or place or person) and, oh, I reach out for it, and because I am rich in so many ways, most of the time I can have it. Right then. When I want it most.

But I know I've done wrong when, as soon as I take hold of the thing, it turns to ash. The pleasure is gone. The charm of anticipation turns into the disappointment of possession. I have a fur coat like that. 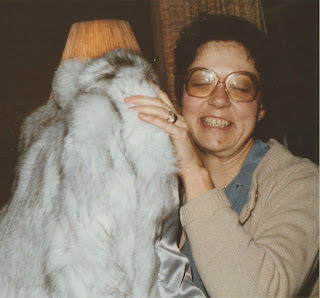 I remember wanting it so badly. It was soft and beautiful and warm. And Dave, because he loved me, bought it. And I pulled it out of the box, and there it was, as beautiful as it had always been, but by the time I put it down again, the luster of it had gone. I still have the coat, but never wear it. I do lend it out sometimes, but keep it around mainly to remind me of the misuse of love, of gifts, and of money.

I am not Mother Teresa. God has not called me to that kind of practical poverty. But He calls me to poverty nevertheless, the kind that bears all the outward trappings of wealth, but must, at the risk of my soul, be borne with constant understanding that I am as much a desolate waif before Him as any street urchin or condemned criminal.

Mother Teresa serves from a place of intentional poverty, and I serve from a place of apparent wealth, but our service must be identical before God. Today, when we remember the Last Supper and imagine watching the bended head of God as He washed his friends' feet, we recall that He became nothing before us, although He was God. I must become nothing before Him. It is my only rightful place.