What if I Could Not? 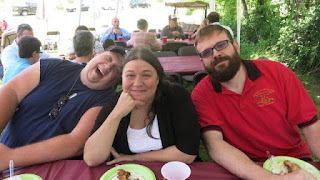 This is my niece Jocelyn. She's sitting here, a little over two years ago, between my younger son and her husband, and she's smiling.

Today, she is dying. Not fighting for her life anymore....just dying. Her liver has failed, her other organs ceasing to function one by one, and her blood has ceased to clot. She's 38 years old.

She is more than 600 miles away. I can talk to her if someone holds up the phone, but she can no longer respond. Her mother says that she squirming with discomfort. She knows. There is no doubt that she knows she won't live much longer.

The problem is this: The ones who love her struggle not only because she is way too young for this to happen, but because she has, for at least the last ten years, professed to be an atheist. She is a young woman without hope for any future, any life beyond this one.

She and I have talked often about this. She was churched as a youngster, even tried to worship for awhile, but the contradictions in her church and the hypocrisy of the people who worshiped there became too much for her. She gave up. She just gave up. And, in recent years, although she would tolerate, even sometimes ask, for prayer, she still would not profess to any belief in God. She saw the contradiction, of course, but would not open her heart.

And here we are today. The end of her road.

And it is Sunday. This morning I went to church.  As I moved into the usual pew, and stood at the appropriate time to say, "I believe in God, the Father Almighty", I was struck nearly dumb. So simple a phrase, so easy. I've said it pretty much all my life...so often, it has become automatic, taken for granted as normal. But it isn't normal for everybody. What would life look like, particularly the end of life, if I could not? What if I could not honestly say I believe in God?

I can't imagine it, frankly. Unlike Jocelyn, who said that God made no sense to her, I can make no sense of a world without Him. And I am frozen by the enormity of it all...the vast implications of a simple phrase, the everyday working out of it in ways that have become so much a recurring part of my life. I marvel at the symbols that carry such heavy implication, yet are so ridiculously common-- pieces of wood and thorn, bread and wine. No wonder some struggle with belief.

We are seemingly given so little. Small, fleeting representations that are monumentally life-altering. Out-of-the-box game changers. Leaps of faith. A word in the right place or time that sinks to the core. A conviction that honoring my creator trumps all other endeavors. Loving for no other reason.

This is why, I'm thinking today, that just being good is not enough. It keeps us pinned to Earth. It does not provide for the God who explains everything we don't understand. It does not give us a reason for having lived. It does not answer the whys pretty much everyone seems to ask when their last day arrives. If God is not real, everything lofty and important dies in that last breath. Transcendence doesn't exist. Without Him, we are left to squirm.

I told Jocelyn this morning that she should trust now. Rest in God, and trust, and everything will be all right. Even now. Even when she has come to this. She can still open her heart and I pray that she does. God is loving and merciful. He will meet her there. This is the day.