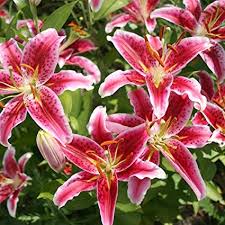 This is the view from my sunroom window today. Stargazers--open to the sun in spite of their name and sharing their over-the-top extravagant fragrance. They are the glory of summer and the glory of God. They are. And this is how I know:

I am confident of this: I will see the glory of God in the land of the living.--Psalm 27:13

It has to be here somewhere and, well, this is where I found it today.

Of course, not everyone sees it in the same place, but when Jesus tried to explain God's glory, He didn't tell His listeners to look up into the sky or to imagine somewhere far away. He told us to look at whatever is in front of us--a field, a pearl, a fish, a loaf of bread.

It's kind of like those puzzles that seem to be one thing and then, when you shift your gaze in just the right way, become something else. Like this one, called the Healing Grid--only the section you stare at for 30 seconds or so seems straight and regular, but shift your gaze to one of the irregular parts, and that one then becomes straight in turn. The thing itself doesn't change, but your concentrated view of it reveals something you weren't able to see before.

When Aaron and all the Israelites saw Moses, his face was radiant.  --Exodus 34:29

Moses looked at God uncovered and God left His mark on the man. He face shown with glory so brightly that the it scared the crowd and Moses had to cover it.

It's the glory. Right here. Every day.
If we aren't astonished, we haven't found it.

It's the rhinestone among the diamonds, the silver among the stainless. Easy to miss unless we're looking. Looking and not stopping at the beauty of the thing itself (ie: golden calf), but seeing beyond it.

Let the smell, or the sound, or the feel of the God-infested thing sink in far enough and every step through this world will evoke a step into heaven.

This is the Catholic feast day of St. Ignatius, a warrior before he was a man of God--a warrior that one day laid his sword on the altar and eventually developed the Ignatian discipline by which even today monks and many who live even a modicum of the contemplative life are trained. And it's called a discipline for a reason. That's what it takes.

To look for God everywhere. To bend every action to His service.
To do this is to make our own face shine with His glory.
You will not see this looking in the mirror, but turn your God-focused face to the world and He will shine. 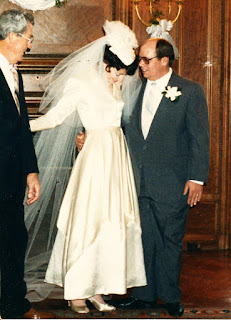 There’s something odd about the pictures—the ones I keep around me when I sleep.

Most pictures recall single moments, like the ones the girlfriends constantly take of our trips to wineries or the ones of grandchildren—Emma’s graduation, me and Maia at Fenway, or Ella in the pumpkin patch. They are documents that freeze incidents for later recall lest I forget what happened then or how these dear people looked on that day.

But not the pictures of you. They are not frozen. They live. Not like a movie, not in two dimensional speech and motion, but in all four dimensions and all five senses. When I look at you whispering to me, intent in your gray suit, wearing that ridiculously fragrant and fragile gardenia in your buttonhole, leaning over, careful not to disturb Aunt Agnes’ old satin wedding gown that I finally got to wear after so many years of dreaming of it, I don’t see the picture. I hear the hush of assembled friends waiting in seats for me to walk down the aisle. I know the knot of nervousness, smell the roses and heather. I remember—no, I walk—again in that place. It all happens over and over again every time I look at the picture and pause for even a moment.

Only your pictures are like that. Opening an album you populate is not a step back in time. It is time blurring completely. Days and years shuffling seamlessly into an incomprehensible, random deck of moments, gathered into a heap without regard for chronology. But, even in their disarray, they are polite. They don’t crowd; they wait their turns. Some are longer than others, after all. They fluff and preen with pride in their power over the present. They force today to step obediently aside in deference to the attention I admit to have willingly given them.

It’s my fault, after all. I don’t want to let them go, any of them. They bring warmth and light into today’s confusing quiet. They provide framework for this future left to me, a future without you, who have so long provided something firm to lean on. I look at them and think, Yes, This was Something Good. This is Someone I love and Who loved me back.

They are my Brunelleschi.
They are. 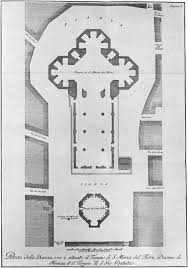 When builders in the Middle Ages wanted to build a great dome, they began by constructing supports and scaffolding from trees the same height as the dome they’d conceived. From that place of support, brick by brick, the dome would rise. When they were done, and the scaffolding no longer needed, they dismantled and discarded it.

But, in 1296, Florence began to construct a cathedral too big for a dome built that way. No trees grew tall enough to reach the dome they’d conceived. They could build no scaffolding to it and thus, did not even know how to begin. But, unwilling to mitigate their grand design, they began to build anyway, and later completed a dome-less sacristy that remained open, with a vacant hole where the dome ought to have been, for almost 200 years.

Then, in the early 15th century, one man, Filippo Brunelleschi, understood what needed to be done. Rather than erect supports from the floor as had always been done before, he built the dome, not of a single shell, but of a double one, each supporting the other as they went up together, connected by a winding staircase between them from which the masons worked.
The first shell is an integral part of the second, not visible from the outside, but absolutely essential to the stability of the whole.

Now, I think  my life is that dome, the crown, the finish of what we’d begun together. After all this time waiting, I can begin to imagine building in the only way that remains to me, like building my own inconceivable, impossible dome, with our years together its indispensable support.

I do have to build something, after all, whether I am willing or not. I have to continue to live whatever life’s been given me. But, without you, I could at first find no accessible way to do it. In the end, I find I was right. I can’t. And I don't have to.

You have to be part of whatever shape my life takes from here to its end. I have to keep you close to do that, close enough so that I don’t plunge into the gaping hole below left by your visible absence. Even while I stare at an undeniable void, I have to lean on what I know is strong and stable, made of both the old and new, visible and hidden.

I can do it because you stay with me, vivid and alive, and having already done it once together, you can help hold me up while I finish what was begun. And from that beginning, I can yet build something new and beautiful.
Posted by JoAnne Potter at 9:00 AM 1 comment: