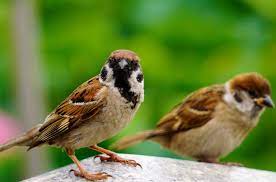 Spring mornings at the farm were blue and white, colored by the sky, hard and square-edged. The memory of winter lingered long there. Birds hid in the woods. The sky commanded all. Horizon spread side to big side. Morning sun declared reign over bested hills. Red, pink, orange, yellow in response to cloud and temperature, but feeling more like a declaration from God that He’d done it again, kept the world rolling another day. Magnificent, out of any human control.

Even Florence’s stone streets were softer than the farm’s eventual demands. Its welcomes evaporated, its embrace withdrew. I am too big for you, it told me every day. I shrank from its stern declaration, tried unsuccessfully to soften its edges with dahlias, asparagus, and willows in flowerbeds appropriated from random underbrush, to temper its warnings with cats and grazing goats, to test its threats with housefuls of guests who could still see welcome where I no longer could.

The farm shut its doors to me, crowded me out with overgrown fields and a silting well, too much lawn, too much house, and echoes. Too many echoes.

The deed said the farm belonged to me, house and land, but the deed lied. It belonged to Dave still and dismissed my supposed authority with a perfunctory wave. No, it said. You hold no sway here. You can’t sign enough documents or plant enough flowers, or hire enough contractors to change that.

It was good practice, though, because this place is different. Green and willing, with rounded edges and birds that sing on garden chairs and front lawns, with neighbors that laugh and invite, with children and grandchildren within arm’s reach, lacking facile criticism and second guesses.

God reigns here, too, but He shares His sovereignty with me, gives me liberty to spread out and imagine. He commanded me here, mechanically propped up a failing body to possess it, said Go, and made me to live against my will. God is pulling out pieces of my past like Jenga blocks and I can’t help Him because He knows which ones will make the pile fall and I don’t. He’s driving and I’m along for the ride. I didn’t decide to live. I didn’t decide to move. I didn’t choose this place or these people. It’s not my life. It’s His.

Across the street, two squirrels chase each other around tree trunks. Not finding food, not building a nest, not caring for babies. Just running for the joy of it. God expects no more from them but to love their life. Like sparrows and lilies. Maybe even like me.

Posted by JoAnne Potter at 6:32 AM No comments: 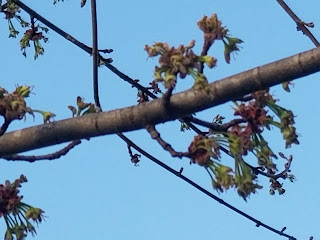 A real estate agent will tell you that they can sell you a house, but it's not true. You don't choose a house. The house chooses you, being older and having had the persistence to stay put, whereas you found it necessary to abandon one place for another.

Then, once having chosen, the house reveals its secrets one by one, uncovering a stubborn drain here or a squeaky door there. In those first weeks, bricks, plumbing, concrete, and roof all announced their immediate need and I tried to prove my faithfulness in meeting them. 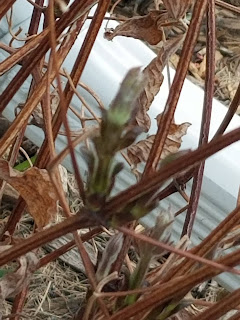 A house saves its  best surprises, though, for its living parts. Within weeks of signing the papers, my house buried its life, shrinking beneath frost and snow, sleeping for five frigid months, taunting, hiding behind lowered lashes. Spring has come, though, and now that it has, the house yawns, stretches out its arms, and lets it fingers unfold in greeting, almost before I can see.

Crocuses first, purple and striped. Then the lush, but niggardly, green of a daffodil clump that saw fit to yield only one flower. The clematis sprouted only halfway up. The tree next to the arbor that won't tell yet whether leaf or flower will come first. Tulips, roses, raspberries, strawberries, all unwinding green from some inner storehouse of life, all according to their own predetermined recipe. 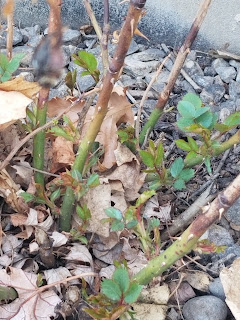 This is the welcome that didn't come in the first week or month, that waited until I'd tested worthy. This is God's first breath saying, Yes. You are welcome here. Look what I've saved for you. This is only the beginning.