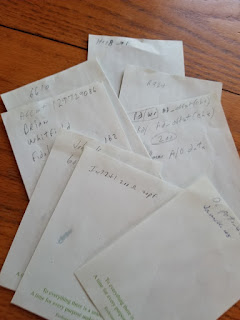 These are the ones that get you. The ones you don't expect. The ones that come out of seeming nowhere.They are the shirt you thought you'd given away. They are the oil reminder in the back of the glove box. They are the random handwritten notations he had to have made years ago and left in his little note box, the same one I hung on the refrigerator and use now to remind me to buy toothpaste.

They lay there in wait all this time, the first one showing itself when I reached in yesterday to begin a new shopping list. And they came out of that box one right after the other, unashamed of the terror that came out with them, scalding my hands. I tried to catch them as they dropped, scrambling to pick them out without having to touch them. Foreign objects. Not familiar enough to be memories. Not strange enough to ignore.

I can't decipher most of them--electronic gibberish that undoubtedly meant something in the context of a design, calculations he made and wanted to remember but have no meaning now that he's gone. Secrets--the complex meanderings of an often indecipherable mind.

They don't belong here. Not without him. But they are here and I can't throw them away. He touched them and his touch hasn't graced this place for a long time. I want to sleep with them. I want to smell them. I want to tuck them into my clothes like sachets, hoping they leach that well-remembered warmth. Instead, I cry, holding them in outstretched hands so the writing doesn't smear.

Every time I think that maybe he doesn't live here anymore, he shows up again. A scrap, a color, a tool, an ash. A glimpse that vanishes around the corner just as I look in that direction. It hurts, but it is a hurt that also consoles. No, I don't see him anymore, but it's nice to know he will sometimes still show up. They are welcome hauntings. They make him real again.