The next excerpt from my journal doesn't surface until April 7th. In the meantime, there is today: 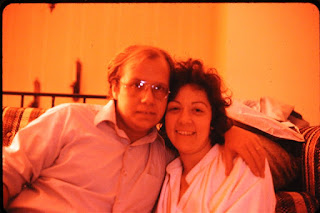 Memory Lane. For a full-time widow, this is not a place one strolls. We move into that address, carry in our furniture and hang our clothes in its closet. It's not a stop, but an interactive experience, one in which we open our imagination rather like we do when we go to a movie. The memory plays itself back and we respond as though it were happening all over again, fully knowing the pleasure or pain of that time right now. Living it with both old eyes and new. Sometimes, it has to do with a circumstance or a person, someone or something that brings with it an experience we shared with our beloved. Sometimes, it's simply a date. Like today.

April 1. April Fools' Day. I've never quite gotten over shaking my head at the irony. What were we thinking? April 1 was the day I moved in with Dave.

Yes, I moved in with Dave before we were married, and it was not our most stellar moment. Even now, I find it hard to understand. Who were we then anyway? Saying we were in love doesn't quite cover it. We were, of course, but we were also out of control, at least I was. Borne along on what felt like some kind of tidal wave, compelled by a desire to escape and the promise of adventure. Knowing it broke every rule of God and man, but also that it opened a whole new horizon of possibility. Eve probably said the same thing. Certainly, God didn't mean this apple, this tree...

But He did, of course.

I simply called Dave that morning and asked. "Will you come and get me?" I was married to someone else, you see. Married, and a mother besides, and in one moment, threw it all in. Even now, I can't separate the profound regret from the exhilaration.

It was glorious in some ways. Oh my, it was. Dave said he wanted to protect me, but instead threw me headlong into intensity. We lived. Oh, we lived.

But there was a price to pay for all of that, and for letting, on that April 1, our hearts rule our heads and our consciences. It took years for the sin of it to unmask itself and to completely raise its horrible head. It nearly destroyed our lives together in the process. What began so hot nearly burned us to a crisp.

But God was faithful even when we were not. And He mercifully dismantled the house we'd built on sin, salvaged what was good in it, then built us a new one built on Him. Often, it wasn't easy or fun, but for all the regrets I still harbor for decisions I've made, I bear no regrets for the decision to follow Him no matter where He led.

In 1978, on that April 1, I ran away from God by running to Dave. Eventually, step by difficult step, Dave and God stood side by side, and I could draw near to them both together. If anyone saw anything good in us, it was based on that journey, one we made together.

Were we fools on that April 1 so long ago?
Undoubtedly.
But because of what God did for us in the interim, Memory Lane today is a sweet place. I live here gratefully and in awe, smiling all the while, even, sometimes, through a tear.
Posted by JoAnne Potter at 5:04 AM