The Dichotomy of the Holy Place: Terror and Rest 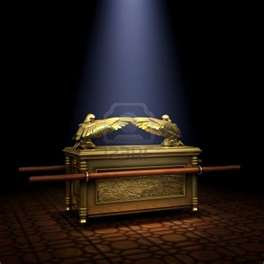 Five or six years ago, a local summer camp erected a replica of the tabernacle, the wood and animal skin structure that the Israelites carried around during their forty-year wanderings, erecting and dismantling it at each stopping place. In it, Moses' people sacrificed and worshiped. It served as the center of their communal lives, and God visited them there.

Our local tabernacle replica started out as an attraction, I think. School and tour groups came to it, touching the bells on the priests' robes, handling the instruments of sacrifice, tasting shewbread. The structure stood in a open field away from the camp's main cabins and kitchen and meeting rooms, past a small woods and a stream filled with watercress, into a sun-filled clearing that may once have been a farmer's field. It rose against the distant hills as improbably as one of Frank Lloyd Wright's angular homes against fragrant forests and waterfalls. But after all the school groups got back on their bus, the tabernacle had a hush about it.

Its door faced east, and the sun rose beyond it, drawing all the courtyard structures into morning shadow. Entering in expectant silence, I lingered over the altars and basins, remembering that these places washed with blood most of the time. The hangings of the courtyard closed in. Within their high walls, hills and forest disappeared. The Holy Place, silent and covered with rich brocades and hairy pelts, stood at the far end. Like Moby Dick to Ahab, it beckoned.

Its draped door was heavy and moved aside reluctantly. Inside, the lampstand flickered in deep gloom. Incense burned lazily. Loaves waited for a priest or a hungry David that never came. At its far end hung another curtain. I knew what waited beyond: the Holy of Holies, the Arc, and the place where God met men.

I knew that the Israelites feared this inner chamber. They tied a rope around the priest's ankle when he entered in case God struck him dead when he approached. Even in this make-believe place, I sensed that fear. The Holy of Holies had no light and, although the sun had risen high in the outside sky, no ray of light, no breeze penetrated its thick coverings. No light, no sound, no motion. Like a sensory deprivation chamber, this inner sanctum allowed for only once presence: God's. The cherubim topping the arc bowed to one another in expectation, their wings almost touching in homage to the God who did not come that day. I found that I was relieved. The place itself brought pause enough.

The Israelites' God was awesome and terrible. Their tabernacle, awash with blood outside and with terror inside, drove this home. But God wants me to know him this way:

God wants to shelter me under the same wings beneath which the Israelites so feared Him. He wants me to approach. He wants to protect me, not slay me, in His tabernacle. He wants to be my refuge. What changed? Why the shift from trepidation and suspicion to reassurance?

Moses' Jews could not approach God, but I can. In fact, He has invited me by name. Their sacrifices did not provide entry. Jesus' sacrifice, however, did. Today, I enter the tabernacle behind Jesus and because He has full access, so do I. God called me, God chose me, God drew me to this, and once there, offers the only true rest known to any man.

One thing I ask of the Lord, this is what I seek, that I may dwell in the house of the Lord all the days of my life, to gaze upon the beauty of the Lord and to seek Him in His temple. For in the day of trouble, He will keep me safe in His dwelling. He will hide me in the shelter of His tabernacle and set me high on a rock.--Psalm 27:4-5

Posted by JoAnne Potter at 4:48 AM