Fruit of the Cross 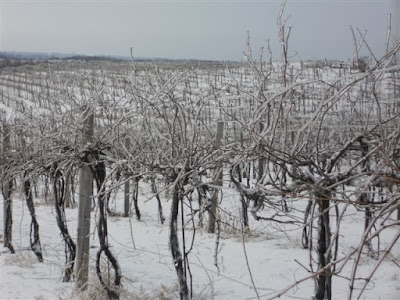 When most people think of vineyards, they recall lush leaves that nearly span their palm and heavy clusters of bursting grapes, dark and ready for winemaking and, indeed, in late summer and early fall, right before harvest, it does look like that. In winter, though, the vineyard looks stark and bare. Vines stand out black against the snow and the branches that held last year's harvest poke out useless in all directions.

Beginning in January or February, the orchardmen begin to prune. All the branches that grew out randomly during the previous season come off and all they leave are the main stems: one that comes up straight and true from the ground and two in either direction perpendicular from it, trained to their supports. After pruning and before new sprouts come in spring, each vine looks like a gnarled T, too much like a trained and tortured reminder of the cross that once bore up the Son of God. Acre after acre, in perfect rows, the vineyard becomes a dim graveyard, hiding behind grim promise of a vibrant new life.

Until I could witness the yearly progress of grapevines under that hands of the orchardmen who care for them, I didn't understand God's tender imagery in the gospel:

I am the vine and you are the branches. If a man remains in me and I in him, he will bear much fruit. Apart from me, you can do nothing.--John 15:5

The Lord is indeed the vine. He told His disciples how He would save them and gave them a vivid picture by which they could see it. His cross is the source of our nurture and our sure root. Without savage pruning, no good harvest will come. Eventually, an unpruned vine will diminish unto uselessness. Only by regularly pruning back into its perfect shape will it produce the beauty and round, full fruit for which it was created.

The wine begins with the cross.

Email ThisBlogThis!Share to TwitterShare to FacebookShare to Pinterest
Labels: cross