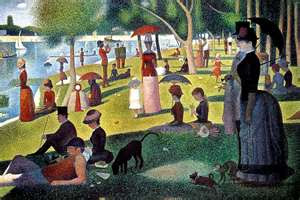 Nineteenth century painter George Seurat was a pointillist--he created his works of art not by lathering up a broad brush and drawing it expertly across a canvas, but by placing thousands, sometimes millions, of tiny dots, precise in color and position, side by side so that up close, they look like beautiful grains of sand, but from a distance, they blend into something much more. One of his paintings, called A Sunday Afternoon, hangs in Chicago's Art Institute. It is huge, taking up most of a whole wall and when I had the chance, I lingered there sometimes. The painting had as much to say in its parts as it did as a whole. Individually, I admired the dots for their perfection and precision. Together, I never failed to marvel at how they gradually merged into something lovely, complete, and cohesive.

Seurat's paintings remind me of Your Word.

He forgave us all our sins, having canceled the written code with all its regulations that was against us and stood opposed to us. He took it away, nailing it to the cross.--Colossians 2:14

For the Israelites, You were never near. They approached You only through priest and sacrifice, even those times filled with fear for their lives. Moses and Abraham rose above the rest because You talked directly to them, but for everyone else, all most men knew of You were Your laws. As a result, they held your law, every tiny detail, as the closest they could get to You. By obeying every regulation, every little nuance, they came near to You, loved You. You gave them this opportunity through giving them the law and they loved You for it. In those times, they stood close to the painting, handled each little dot with reverence, and were careful to replace them exactly. Rabbis still do this, arguing over tiny points of Torah, and glorying in the argument because it brings You closer to them. The King James Bible calls these little points jots and tittles, and warns us not to change them. We call the same practice nit picking, but the idea is the same and the warning well taken. Even Seurat's paintings would change in the whole if someone altered the color or position of the dots.

You never changed the dots, either. Every tiny portion of Scripture remains just as You ordained it. You did something else. You nailed it to the cross. You killed it. Just think of the image of that. Paul wrote this verse around 60A.D., when ordinary citizens still saw people tortured and murdered this way. They saw these victims scream and writhe in agony before dying. You put the old law, the law Your people loved, on that same cross, and it goes out kicking and screaming, too.

Our Scripture gives detailed step-by-step instructions regarding how to approach You. To better understand it, I still pick it apart, separate all its nits and jots into pieces small enough to understand. This respect for detail pleases You, I think, but also leaves me in danger of missing the whole picture. When I concentrate too long on the individual parts of Your newer law, the one you tore open the temple veil to expose, I can, over time, destroy the glue by which they form the new whole You died to create. Your new law takes all the little pieces, the finite instructions, and assembles them with the glue of love. When I disassemble them, and let them stay that way, the love leaks out and all that is left are little, lovely, disassociated dots.

I must not love only the dots in your beautiful Sunday Afternoon. Even while I love every single piece of Your Word, I have to ingest whole gobs of it, to dive into its whole ocean, read great hunks daily. You show Yourself in the smallest parts, but they are only parts. The Scripture is immense because You are. The pieces tell me what to do. The whole tells me who You are.

Seek the Lord while He may be found. Call on Him while He is near.--Isaiah 55:6

Posted by JoAnne Potter at 4:44 AM

Email ThisBlogThis!Share to TwitterShare to FacebookShare to Pinterest
Labels: bible