Shooting in a Strange Land 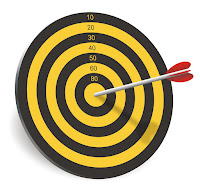 Sometimes I feel like I live and battle in a foreign land. What I see, what I hear, who I meet--I feel at odds with them as I try to measure myself and everything around me against a holy God. I shouldn't be surprised, though, considering that evil still roams to and fro on the earth. It's a matter of territory, I suppose. Both as a body of believers and as individuals, we give and take territory and, like in any battle, we have to know what we are fighting for.

My biggest problem, as always, is maintaining focus. It's like the bull's eye for which shooters aim when they practice. I have to constantly remember that hitting anything outside the exact center isn't good enough. And I have plenty of examples to remind me.

When the Israelites were captured and resettled in Samaria, they missed the target big time. Their priest, their priests, mind you, decided that the best way to accommodate their captors and appease their God at the same time was to adapt to their new environment. They wanted to fit in, to be up to date, to understand the culture. God did not agree.

God insists that I follow Him and Him only without compromise. He doesn't do this because He is a megalomaniac. He does it out of love because He knows that no other way works. Compromise leads to idolatry. Adaptation leads to despair. It happened to the Israelites and every time I give in to what God does not condone, it happens to me.

To this day, they persist in their former practices. They neither worship the Lord nor adhere to the decrees and ordinances, the laws and commands the Lord gave the descendants of Jacob, whom He called Israel.--1Kings 17:34

I have to aim for the bull's eye, even when I am captive, even when I seem nerdy, even when I am misunderstood. I have to love my captors in the process, but my aim must remain steady. I may live in a foreign land and have to fight to maintain my territory every day, but I have no real choice. It's not only a matter of winning. It's survival. If I give in to what presses in on every side, I will look smart and agreeable, but will literally be swallowed up so slowly that I won't even notice.

So, today, I fire away, aiming for the middle, and if I miss, at least I have the target clearly in view.
Posted by JoAnne Potter at 5:25 AM

Email ThisBlogThis!Share to TwitterShare to FacebookShare to Pinterest
Labels: holy