The Skull that Sings 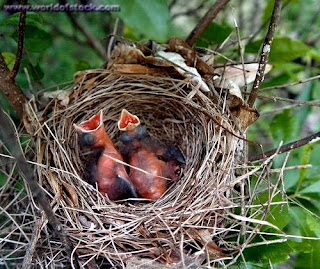 My son Bryan recently gave away his bone collection. This old boxful of treasures, saved carefully for almost two decades, became the precious property of another little boy in exactly the same state of messy adventure as Bryan had been when he first accumulated it. As the new owner pondered an appropriate place to display the collection, Bryan told him that its crown, a nearly perfect cow skull, must not languish. He must hang it somewhere prominent, as Bryan had, to render its full due.

Compliantly, the young man's dad hung it high on a post in their driveway, a greeting of mixed messages to postmen and visitors alike. Then something unexpected happened. An ambitious family of wrens, looking to find a hospitable home, began carrying twigs into it. Eventually, they laid eggs and hatched little wrens there. Now, feathered parents transport food in and out of the skull, flying through the gaping eye holes, an ironic picture in their juxtaposition of old death and new life.

Today, however, I realized they also provide a metaphor for God's life in us. We are as dead in sin as that old cow skull: dry and barren of useful flesh. What pulsed constructively through us died with Adam and Eve's rebellion in Eden. As a result, we rub into eventual dust like Ezekiel's dry bones. When God breathes His Spirit into us, though, He brings life back into the husk. Like the flaps and chirps of baby wrens, He brings sound and warmth into a dead place.

Now, this is not a perfect metaphor--the skull did not rise up and speak and the wrens will eventually move out and the skull will empty again. But when I imagine how a merciful Savior filled my own sad life with a song of hope, well, the skull dwellers make the perfect picture of grace.

If Christ is in you, your body is dead because of sin, yet your spirit is alive because of righteousness.--Romans 8:10
Posted by JoAnne Potter at 5:22 AM